Multi-architecture is not something that most people think about - everyone assumes that the only architecture that counts is x86_64, but that's not the case!

In my job at Red Hat I care about making sure that software running on ppc64le, arm64 and s390x behaves just the same as it does on x86_64, which brings me to containers.  Did you know that container images are architecture specific?

It makes sense, right?  Containers contain software, and often software is architecture specific.  When you pull down a container, you never specify an architecture to use.  So how does that work?  And more importantly to us developers, how do I ensure my containers are multiarch-aware and "just work" no matter which platform we are running on?

For the purposes of this post, I'm going to be using podman and quay.io, but you could just as easily use docker and dockerhub.  I much prefer the serviceless design of podman, but that's up to you.

[Aside: From here on in I'm going to use the term amd64 in lieu of x86_64.  You can read more about that here.  Likewise you might be wondering why we use arm64 instead of aarch64, you can read about that too.  And if that's not enough, here's a nice link on golang architectures]

A simple application we want to containerise

To begin with, let's build a simple Flask python application.  Something that is super trivial, but can demonstrate software running in a container.  To that end, I present you moo-chop.  It just prints a hello world message in a random colour, like this:

Setting up a container registry

Next we need to create an account on a container registry, and create a repository.  Pretty trivial for the likes of you I'm sure.  I've done this over on quay.io, which you can see here: https://quay.io/repository/mrdaredhat/moo-chop

Setting up our environment

Just for readability, I'll define some environment variable here that you'll need to use on each architecture build host and where you construct your manifest.
# One time setup
$ ARCH=ppc64le # or amd64, arm64 or s390x
$ QUSER=#your quay.io username
$ QPASS=#your quay.io password
$ PROJECT=moo-chop
$ GITREPO=https://github.com/mrda/$PROJECT.git

Building our containers on each architecture, and pushing them to quay.io

Now we have source code we want to build, and have access to a container repository, we want to build containers for each architecture and push these to the container repository.
The process we follow is exactly the same for each architecture, so I'll only show the steps once.
# Repeat for each architecture you want to support
$ ssh <build-host-for-this-architecture>
# Paste in your environment variables here
$ mkdir -p src
$ cd src
$ git clone $GITREPO
$ cd $PROJECT
# Build your software.  In our case, there's no compiling needed
# as we're only distributing python code.  But if this were C or Go
# or something else, this would be your build step.
$ podman build -t quay.io/$QUSER/$PROJECT:$ARCH --arch $ARCH .
$ podman login quay.io --username $QUSER --password $QPASS
$ podman push quay.io/$QUSER/$PROJECT:$ARCH
^D
And that's one architecture down.  Rinse, lather, repeat for all architectures that you want to build for.

The podman push commands that you did in the step above pushed your built containers into the container registry.  You should verify they are all there as expected.  In my case, I can do this by visiting https://quay.io/repository/mrdaredhat/moo-chop?tab=tags and seeing the tag for each container build that is now available. 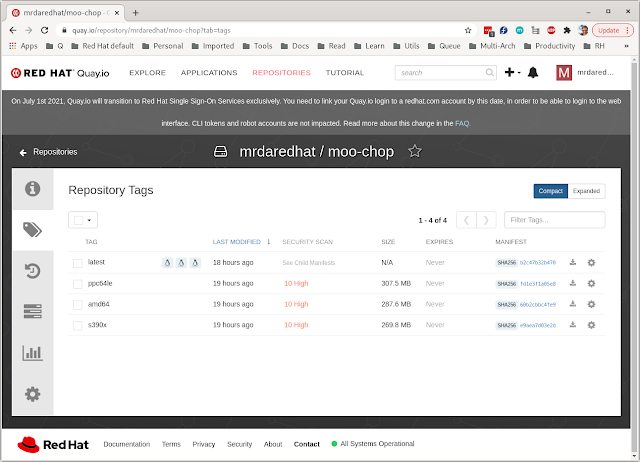 Testing it out to see that it all works